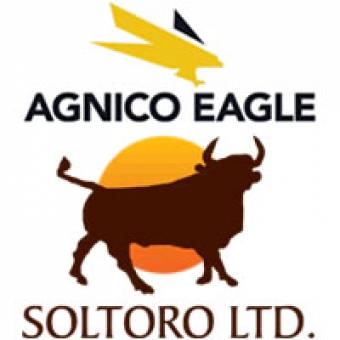 Soltoro Ltd. (TSX VENTURE:SOL) has received a property-wide aeromagnetic survey and assay results from over 1,350 soil and rock samples taken at La Tortuga by Gold Reserve Inc. (TSX VENTURE:GRZ) (OTCQB:GDRZF). Gold Reserve is in the second year of an earn-in option and may acquire an undivided 51% interest in Soltoro's La Tortuga property by making an aggregate US$3,650,000 in option payments and property expenditures over three years.

The 11,562 hectare La Tortuga property is located in Jalisco State, Mexico and is being investigated for the potential to host a bulk tonnage gold-copper deposit.A total of 930 line-kilometers of survey lines (100 meter spacing) was flown over an area of approximately 86 square kilometers by MPX Geophysics Ltd. of Ontario, Canada. All known mineralized targets were covered, including the Caballo and Quartz Breccia Veins, and the Garrochas trend, a prominent northeast-striking structure with strong gold and copper anomalies at several locations, including a historically active mine.

Andrew Thomson, President and C.E.O. of Soltoro Ltd., stated: "The airborne geophysical survey suggests the presence of a large intrusive at depth within the La Tortuga property. Gold Reserve is awaiting approval of permitting to begin drilling on the property."

The airborne geophysical map (Figure 1) and sampling location maps (Figures 2 and 3) may be viewed at: http://www.goldreserveinc.com/documents/TorOct21NR.pdf

A reduced-to-the-pole magnetic map is shown in Figure 1. Overlain are mapped structures known to be mineralized. Several important patterns are apparent. The Quartz Breccia vein hosts marked discontinuities in the magnetic character along its known extent. Moreover, there is an unusually strong magnetic high where the Quartz Breccia intersects the Garrochas trend, as well as in the area of the old Garrochas Mine. These two trends, typified by the Quartz Breccia Vein (NW-SE), and the Garrochas/Caballo veins (NE-SW) are well established in the district as important hosts to gold and copper mineralization. The circular magnetic high in the area of the Quartz Breccia and Caballo veins suggests an underlying intrusive, one that is displaced and/or chemically altered by hydrothermal activity along the structures.

Geochemical information from rock and soil sampling adds evidence to the importance of the Caballo and Garrochas veins. Figures 2 (Structures and Significant Outcrop Sampling Results La Tortuga) and 3 (Detail Map - Historic Las Garrochas Mine Area Significant Outcrop Sampling Results) show the location of significant results from rock sampling. Table 1 shows the results for several metals of interest, including gold, silver, copper and lead. There is a preponderance of high copper values in the area of the old Garrochas Mine, some associated with anomalous gold and lead. The Caballo vein shows sporadic copper anomalies for a distance of two kilometers along its known extent. This includes some samples running over 1% Cu from an abandoned decline. This feature was discovered by the field geologists during routine work.

Two new structures revealed from fieldwork are the Creston and Joel veins. The Creston vein trends N 80 E and appears to connect the Garrochas and Caballo veins. A number of outcrop samples taken along it are slightly anomalous in gold and copper, including the two shown in Table 1. Another new find was the Joel vein, due south of the Quartz Breccia vein. The exposure is poor and only float samples were gathered from an exposed quartz vein. Table 1 - Notable values from outcrop samples of quartz veins and surrounding volcanic rocks, for the Garrochas, Caballo and Creston veins. Values for the Joel vein are solely represented by quartz vein float sampling.
Gold Reserve has initiated follow up trenching and ground magnetics programs based on the results received to date. Gold Reserve has also completed all applications for the diamond drilling program announced May 1, 2013 and is awaiting notification on permitting. Drilling is scheduled to commence shortly after receipt of permitting.

Mr. Steven T. Priesmeyer, C.P.G., is Vice President Exploration for Soltoro Ltd. (TSX VENTURE:SOL) and a consultant to Gold Reserve. He is a qualified person as defined by NI 43-101 and he has reviewed and approved the contents of this press release. Assaying from this program was completed by ALS Chemex through their office in Guadalajara, Mexico. Analytical procedures include a 33 element ICP-AES analysis (ME-ICP61m) and a 50 g FA AA finish for gold (AA-24). Silver assays exceeding 100 g/t are re-assayed by HCL leach with an ICP-AES or AAS finish (OG62).

Soltoro is engaged in exploration for gold and silver deposits in Mexico. Soltoro holds in excess of 41,000 hectares of ground in Jalisco State. Soltoro is focused on expanding silver resources at the El Rayo silver project while seeking partners to advance the balance of its projects. Soltoro holds 15% of the common shares of Argentum Silver Corp. with a 3% N.S.R. payable on Argentum Silver's Victoria and Coyote properties. Soltoro has 59,783,037 shares outstanding and trades on the TSX Venture Exchange under the symbol SOL.