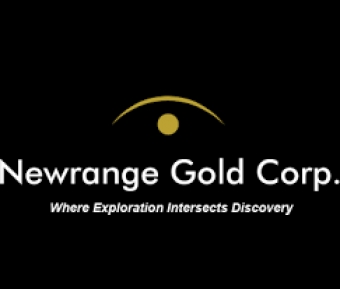 VANCOUVER, BRITISH COLUMBIA, November 28, 2017 (TSX-V: NRG, US: CMBPF, Frankfurt: X6C) -- Newrange Gold Corp. ("Newrange" or the "Company") is pleased to announce that the Company's property wide magnetic, radiometric and gravity geophysical surveys have identified multiple new gold targets, in addition to expanding known zones of gold mineralization. On the western side of the Property, the geophysical data suggests that the Pamlico Ridge mineralized trend is likely more extensive than previous mapping had outlined, and may be up to 4 ½ kilometers long. The final report on the surveys, titled "Interpretation of Airborne Magnetic, Radiometric and Gravity Data for the Pamlico Project, Mineral County, Nevada", by EGC Inc., describes multiple skarn and sediment hosted gold targets indicated by the integration of the magnetic, radiometric (potassium) and gravity data with geologic mapping. All maps and sections referred to in this news release may be viewed on the Company's website at: www.newrangegold.com or by following this link.

Description of the Geophysical Surveys

The three geophysical surveys conducted at Pamlico by the Company include airborne magnetic and radiometric surveys, as well as a ground based gravity survey. These surveys measure various physical properties that can be used to help locate mineralized targets:

Airborne magnetics measures variations in the earth's magnetic field caused by various rock packages extending from the surface to depths of a kilometer or more, and provides a basis for constructing 3-D models of potentially important host rocks, their related structures and the presence of magnetic minerals. When combined with geology, this magnetics mapping helps to delineate larger intrusive bodies, more localized dikes and sills, and marker beds in both the sedimentary and volcanic units. Alteration that has related magnetic minerals, such as magnetite and pyrrhotite, can be an important indicator of skarn zones that may have related precious and base metal mineralization as at Newmont's Phoenix Mine at Battle Mountain, Nevada. Locally, skarn alteration of limestones has been mapped on the Property. Certain rock formations develop characteristic "signatures" of magnetic response that indicate their positions in the subsurface that can be used to help guide exploration for buried mineralization.

The airborne radiometric data is used primarily to map alteration and rock types based on gamma emissions within the top four centimeters of the surface. At Pamlico, the Company is primarily interested in mapping the distribution of potassium, as this element is commonly enriched in and around both precious and base metal systems (K. Freeman, 1996).
Ground based gravity data can help differentiate slight differences in rock density. At Pamlico, this can help determine the depth to bedrock in pediment covered areas, dense "highs" indicating possible intrusives or unaltered limestones, while the less dense "lows" can indicate possible altered areas in the limestones and volcanics.
Discussion of Significant Findings in the Report

Pamlico Ridge and the Current Drill Area (areas 1, 2 and 3 on maps)

A moderate magnetic and strong potassium high has expanded the overall length and width of the Pamlico Ridge Target Area, which includes the: 1) Merritt/Pamlico Ridge, 2) E-W, and 3) Gold Box drill targets as labeled on the geophysical maps. Importantly, a magnetics high correlates with a mapped fold known as the Pamlico Anticline. This fold brings the preferred host rocks to the near surface at Pamlico. Detailed modeling of the magnetic survey indicates the favorable host rocks then dip moderately to the north and south as shown on Section A -- A'.

Alteration of host rocks in gold systems commonly contains potassium rich minerals that can be detected with radiometric data (K. Freeman, 1996). In the area of Pamlico Ridge, potassium forms a strong anomaly generally coincident with, and surrounding known mineralization. Radiometric data shows a potassium anomaly extending more than one kilometer to the northwest of the Company's drill area and 3 ½ kilometers to the southeast that gradually curves to become more easterly, while generally paralleling a coincident anomaly in the magnetic data. Similar coincident patterns are associated with other target areas, including the Gold Box and E-W targets.

Magnetic and radiometric data support the possible extension of structures and host rocks known to be mineralized in the Pamlico Ridge and Gold Box areas into the Pediment Target area. Magnetic data indicates that highly favorable host rocks lie beneath shallow alluvial gravels that cover the Pediment area as shown by Section A-A' here. Importantly, the gravity data indicates that this target area is only covered by a thin veneer of alluvial gravel. Mapping by the Company shows the Pediment area to be generally surrounded by highly altered rocks, and two saw cut channel samples of the single outcrop in the Pediment Target Area yielded 1.5 meters assaying 1.25 g/T Au with a second sample assaying 4.79 g/T Au over 0.5 meters (sample length represents true widths as seen in outcrop).

Outcropping, highly altered and bleached limestone is associated with coincident gravity, potassium and magnetic highs, which, together with the observed alteration, indicate possible skarn development in the sedimentary carbonate rocks. Re-crystallization of carbonate rocks adjacent to intrusive rocks commonly produce gravity highs (J. Wright, 1996b) associated with magnetic anomalies caused by magnetic minerals (pyrrhotite, magnetite) common to skarn alteration (R. B. Ellis, 2017) and potassium is commonly enriched in and around both precious and base metal systems (K. Freeman, 1996).

The Company is awaiting final assay results for the last eight exploration holes of its second phase drilling program.

Newrange personnel are currently expanding the mapping, rock and soil geochemical programs to focus on the important target areas discussed herein. Where accessible, historic underground mine workings will also be mapped and sampled. Reverse circulation and core drilling programs will then evaluate the potential of these targets going forward.

All Pamlico sampling was supervised by professional geologists. The samples were diamond saw cut channel samples that were maintained with a strict chain of custody and delivered by the Company to American Assay Laboratories of Sparks, Nevada. All assays are 1 assay ton fire assay with an ICP finish. Standards, blanks and duplicates were incorporated at a rate of not less than 1 in 20.

Mr. Robert G. Carrington, P. Geo, a Qualified Person as defined by National Instrument 43-101, the President and CEO of the Company, has reviewed, verified and approved for disclosure the technical information contained in this news release.

Located 12 miles southeast of Hawthorne, Nevada, along US Highway 95, the project has excellent access and infrastructure, a mild, year-round operating climate and strong political support from Mineral County, one of the most pro-mining counties in the pro-mining state of Nevada. The Pamlico project covers the historic Pamlico mining district and includes the historic Pamlico group of mines as well as the Good Hope, Gold Bar, Sunset and other historic mines. Since acquiring the project the Company has increased the property by roughly 160% through staking.

Discovered in 1884, Pamlico rapidly gained a reputation as being one of Nevada's highest grade gold districts. Held by private interests for most of its history, the property remains underexplored in terms of modern exploration.

Newrange is an aggressive exploration and development company focused on near to intermediate term production opportunities in favorable jurisdictions, including Nevada, Colorado and Colombia. Focused on developing shareholder value through exploration and development of key projects, the Company is committed to building sustainable value for all stakeholders. Further information can be found on our website at www.newrangegold.com.